The End is the only place more deadly than The Nether. You will likely need a team to survive The End, as it is not wise to go alone. Arm yourself, as you're going to face an Ender Dragon, the boss of Minecraft. The only actual objective/goal of the game is to defeat this dragon. Doing so will allow you to exit The End. 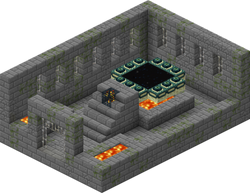 The starless sky and the Void of The End are both composed of a blank, static pattern (though the Void retains a particle effect). The Day-night cycle is absent in the End, similar to the Nether, being replaced by a constant dim light. Most items and blocks (including fluids) function in the End exactly as they do in the Overworld, with a few notable exceptions. Compasses will be unable to find the original spawn point, as it cannot be set in a place within the End, and clocks cannot determine the position of the sun and moon, because it is in another dimension (as in the Nether, compasses and clocks will instead flail randomly in the End). Maps don't seem to map correctly, only mapping static; as in the Nether, beds will explode and cause fire when used, and Nether Portals will not activate in the End. Just like in the PC version, Ender Crystals spawn on top of Obsidian Pillars and the dragon heals from them. Obsidian pillars are spawned in a circle and the exit portal spawns in the center. Two Ender Crystals are covered by Iron Bars so the player needs to climb on the pillar and destroy them. Watch out, though, as the explosion of Ender Crystal can kill you. In The End, there are only two mobs: Enderman and the Ender Dragon.

Traveling to The End

First find a Stronghold. They are found in caves, but you can use the Eye of Ender to find it. It is recommended to bring 12 Eyes of Ender (maybe more) as some will fall into the lava below the portal, some in caves, and some will burst in midair. Throw them and they will float towards the Stronghold. There is only one stronghold per map (3 on PC). Find the portal frame and put Eyes of Ender into the frame. Sometimes, the portal frame may have 0-2 Eyes of Ender in them which makes it easier. Also, search around the Strongholds to find Ender Pearls so you can craft them into Eyes of Ender. Once the player enters The End, there is no exit until the player dies or kills the Ender Dragon.

The Ender Dragon drops a portal and an egg which can be obtained by pushing it with a piston, or by making it fall onto a partial block in the same manner as sand and gravel.

Community content is available under CC-BY-SA unless otherwise noted.
Advertisement